I’m honored to announce that Hold On Harder will be part of Best Bondage Erotica of the Year Vol 1 for 2020! 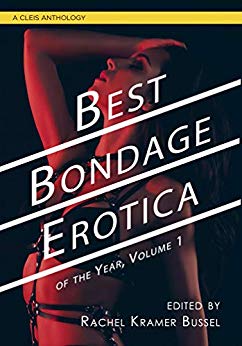 Carrie pulled the bar stool out and stood ready to help Laura into the seat. Laura’s catlike leap would have made that seem ridiculously unnecessary, but Carrie knew how swollen Laura’s ass cheeks were. Sure enough, as soon as Laura hit the hard wood of the seat, she nearly tipped over.

Laura settled more gingerly in the tall, ladder-backed chair and Carrie released her with an unsubtle swipe across her hard nipples. Laura laughed with Tyler, then, and said, “What part of ‘oversensitized’ did you not understand?”

Carrie adopted an innocent expression and reared back in an ostentatious shrug. Her playful move knocked her into the young man on the next stool over and she turned, hands raised to placate. “Sorry, there. I’ll try to keep my shoulder blades to myself.”

The pub clacked and throbbed, busy for a weeknight. People orbited both pool tables and massed across from the dart board, drinks in hand or placed on handy ledges. Casual dress reigned, but a few die-hard femmes had done it up. Carrie appreciated the college-radio rock’s volume—loud enough to let her ignore outsider conversations but quiet enough that she didn’t have to shout.

The young man she’d bumped gave an eye roll that had his whole head sweeping in a circle. He’d been typing on the keyboard-slash-cover of a tablet when they’d walked up to claim the last stool for Laura, a heavy book open in his lap and the expression of someone being swarmed by mosquitoes.

“Sugar, you are far from the most irritating part of this evening.” His words came slowly and he reached for the glass of something amber next to his tablet.

Carrie wondered, bemused, if that could be construed as an invitation to talk. His drama-infused personal style piqued her sense of fun, so she took a chance. “Tell Mama all about it, hon.”

“I’m trying to study,” he began, and Carrie cordially prepared to leave him to it. “But you wouldn’t believe the noises from the apartment above me.”

Carrie waited a beat, then said, “Must have been bad if the pub seemed a better option.”

Laura’s small hand hooked in the waistband of Carrie’s jeans. The backs of her soft fingers slid against the sensitive skin of Carrie’s lower back. A shiver distracted Carrie from the first part of the young man’s plaintive response. She tuned back in to him saying, “…smacks and groans…”

“Wait, what?” Carrie struggled for a mildly interested look, but her face flamed.

“I swear, there were at least three people, maybe more, and I don’t know what all they were getting into, but I kept hearing one woman laugh while another chanted ‘Hold on harder! Hold on harder!’”

Carrie stopped breathing and fresh, intense memories spun around her.