Skip to content
everyday magic lights up Dena Hankins’s “Cooling Down, Heating Up.”

Those of us who’ve been partnered over the long haul know that there’s no need to give up the burn of passion.  We add the warmth of comfort for enhanced pleasure all around.

The story touched a chord in some and got a second coming as part of Best Lesbian Romance 2015.

As read on the Liz McMullen Show 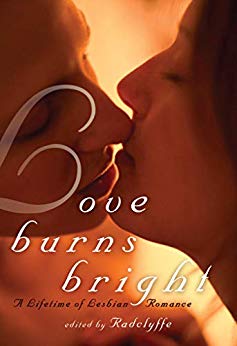 COOling Down, Heating Up

I use the ribbed cotton of my tank top to dry the skin under my tits.  A bra would soak up some of the sweat, but I can’t bear one thread more than the top and my underwear.  I’m sitting on the floor, leaning against the fieldstone fireplace in our hundred and eighty year old farmhouse.  Never thought the fireplace would be coolest spot in the house.

Fan squeaks a bit, way up in the high ceiling.  I’ll have to fix that when it’s not a million degrees.  The blades pour humid air over me like a warm river.

Hennie’s flushed, lying flat on her back in a cotton slip she made up herself.  It’s got thin lines of lace, top and bottom, and she scratches at her thigh where the lace tickles.  She wiggles within reach, hunting a cooler spot on the wooden floor, and I poke her hip with my big toe.  She groans.  “I love you, sweetheart.  Don’t touch me.”

The hills outside Chapel Hill, North Carolina, sport more than one lovely old house.  Ours has little in the way of grounds – fields had been sold long before we came around.  We owned it three years now, moved in on our eighth anniversary.  Still getting bruised and blistered working on it, but that’s just part of owning an old home.  Our bedroom is straight out of the 19th Century, except we made the dressing room into a bathroom.  We updated the kitchen but left the cupboards.  The old plumbing complains and we replace what we have to.

Mostly, we restore what we can and live without plenty.  Like air conditioning.

My lover smiles without opening her eyes.  “Gettin’ itchy?”

Hennie sits up with a whoosh and blinks like she’s lightheaded.  Her slip’s wet  where she was laying on it.  Her tits are bare under the thin cotton and her nipples are soft, nearly flat in the heat.  “Want to make reservations or pack?”

Hennie laughs.  “You’re sweet, but I was joking.  Get on the computer and I’ll put together an overnight bag.”

I lean over and give Hennie my hand.  We both groan at the sticky feeling as I pull her upright.  Pressing my lips to hers without touching anywhere else, I mumble against her mouth, “You’re the one for me.”

“I’d better be.”  Her grumpy tone makes me smile and she pulls away.  Slogging through the dank air, she heads up the stairs to our bedroom on the second floor.  Her voice fades as she gripes, “I still say we should have a summer bedroom downstairs.  We can put a bed in the piano parlor and…”

My face settles into the expression Hennie calls “mulish”.  I consider that an insult and refuse to cop to it.  I love our bedroom and won’t give it up for anything.  A smile breaks through.  Actually, I will give it up tonight, and for that most modern of conveniences.

We’re driving away less than an hour later and pull up to the chain motel a half hour after that.  After checking in, we drive around the back and park in front of the door to our room for the night.

Hennie slides the key card into the reader and shoves against the seal made by the weather stripping.  She gasps and calls out, “It’s already cold in here!”  The delight in her voice is worth the sixty dollars we just dropped.

Holding the bag, I lock the car doors and follow her into the room.  Temperature drops at the door and I shiver hard.  Hennie’s inspecting the room – opening drawers, checking out the bathroom.  Reminds me of a dog sniffing new territory when she does that, though I’d never make the mistake of saying so to Hennie.  She starts the shower and yells, “Good pressure.”

Shower doesn’t stop.  She must have decided to jump right in.  Would she want something to wear afterward?  I’ll probably ruin a surprise if I open the bag, so I decide against getting clothes out for her.  Maybe we won’t wear anything until it’s time to check out.

Water hits the wall and the shower curtain, the sound modulating as she moves.  I picture her turning under the spray, cupping her hands and letting the cool water overflow down her chest.

I can’t stay all sticky while she’s getting so clean.

2 thoughts on “Cooling Down, Heating Up”