Obey is an odd fit for this anthology. It’s directed sex, partnered if only by voice. But hey…I’m glad they chose it! The book has gone in and out and back into print, so get it while it lasts. If you can’t find it in this anthology in the future, keep an eye out for an upcoming collection of my work. 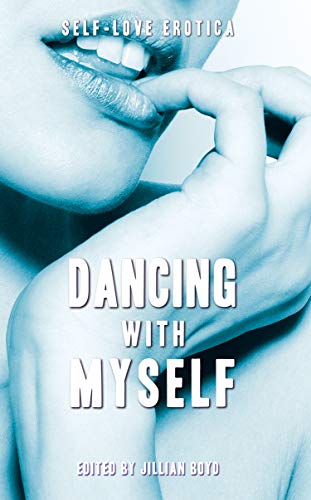 2018
Dancing with Myself
Edited by Jillian Boyd

A wholly unexpected panic made her fingers twitch on her bare thighs.

“Present.” Her client’s voice had roughened.

The pose didn’t strain her body. It just made her feel so damn vulnerable. Maddie wished she’d thought this through more. The pictures she’d studied hadn’t given her a clue how the poses would make her feel.

She spread her knees farther on the mattress, straightened her back as far as she could, and slowly, fighting her own resistance, brought her hands behind her neck. She usually enjoyed being nude, even or especially in the sight of other people, and the sense that she’d been stripped extra-bare cautioned her that something unprecedented was occurring.

Posing was part of her tool kit, one of the disciplines that expanded her effect beyond the envelope of her body and that of her client. Curves and angles, arranged, held for a moment before being shook out or undulated into a different configuration. She knew this, fluently communicated in and controlled this language.

Her breasts rose with her elbows and took on what she knew to be a classic curve, heavy underneath and pointed at the tip. Her nipples hardened further. She wanted to pinch and pull them to relieve the ache.

“Arch your back.” She obeyed and shivered. She put as much grace into the movement as she could, recognizing that she’d nearly stopped doing her job in her confusion.

When Ella had asked if she ever did any submissive work, Maddie had answered honestly. No. The next question crossed the line of professionalism and Maddie felt no compunction about refusing to reveal whether she’d bottomed in her personal life. Her private sex life benefited in ways from her professional one, and vice versa, but she didn’t blur the lines and describing her few, playful forays into restraint and spanking would erase them.

Prostitution was a sacred vocation for Maddie. Her small list of clients, most with physical impairments, provided a modest living and a wide and deep avenue for the expansion of her sexual energy. She’d grown so much since she started doing this type of body service after years as a physical therapist. Boundaries—and being invited to cross them, the power of setting or releasing them—made more sense to her than they used to. The textures and smells and the powerful reality of desire-slicked bodies fruited under her control. Her terms, her choices, put at the discretion of another’s desires.

All that sounded somewhat like soft-sided versions of dominance and submission to her. Imagining how this session would go, she’d thought that Ella would order her around and that she’d find ways of bringing sexiness to Ella’s orders. This wasn’t that. Somehow, it kept getting away from her.