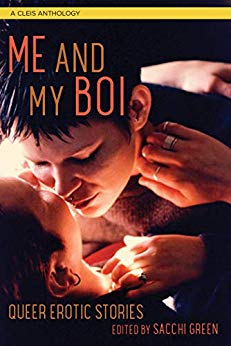 2016
Me and My Boi
Edited by Sacchi Green

Sun baked the concrete pier and heat seeped into the boat shed, abandoned and echoing on Labor Day. Tilly shifted the wide straps of her sports bra. They cut into the muscle she’d put on for the racing season.

“Come on, Tilly, don’t just stand there.” Spin stood next to her, legs spread.

“You weren’t stretching. You were playing with your bra.” Spin nudged Tilly with a sweaty elbow.

Tilly rolled her eyes and set up for the two-person rope pull. She leaned back against Spin’s pull, letting the rope out slowly, and watched Spin’s triceps flex at each push backward. She increased the resistance to make Spin work harder and sighed at the shifting muscles in Spin’s arms. Envy and desire, and nothing to do about either one.

When Tilly reached the end of the rope, they switched jobs. Tilly pulled against Spin’s resistance and her upper lip rose in a sneer of effort. The forward arm had the easy job. It was the push backward that fucked her up every time. Sweated ran down her temples and her shirt clung to her back. Her stroke shortened and Spin barked, “All the way back.” Tilly pushed harder and her sneer turned into grunts of effort. After ten sets each, with a different arm forward each time, Spin pulled the rope free with a flourish. She walked to the ceiling beam with as much swagger as ever, but Tilly was gratified to see that her shirt was soaked in sweat.

Tilly hooked her fingers on the pillar and stretched out her chest, watching Spin toss the line over the ceiling beam and pull into her own stretch. Arms flung wide and eyes closed, Spin leaned forward, pulling both arms back. Tilly’s mouth went dry at the sight of her bunched shoulders, lean arms, and the slight curve under the front of her shirt. When Spin twisted her hips to stretch her back and sides and belly, Tilly’s mouth was the only dry part of her body.

Sweating even harder than a moment ago and wondering if she was wet enough to soak through her tight running shorts, Tilly turned around and hooked the pillar with the fingers of her other hand. She twisted away from the post, feeling the warmth and ache in her bicep and pecs. She enjoyed stretching more than working out.

A hot hand grabbed her wrist and Tilly jerked. Spin’s arm came around her waist and drew her a tiny bit farther from the pillar. Breath arrested, Tilly stiffened.